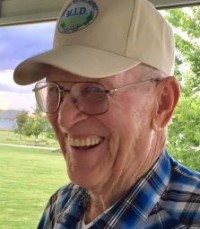 Earl Jerome Wright, 91 year old Rupert resident went home to be with the Lord on Friday, November 20, 2020 due to complications from Covid 19.  Earl was known by many names; family and close friends called him Buzz, schoolmates called him Jerry, co-workers called him Pops, and of course there was Dad, Grandpa, and Great Grandpa.

Upon graduation Earl joined the U.S. Navy.  He was a Korean War veteran.  Upon his discharge from the Navy he returned home to Eden to farm with his dad on the family farm.  In October of 1954, Earl married his long time sweetheart Judith Rayborn Bean in Lakeview, Oregon.  The couple lived in Eden and started their family.  Lucinda (Cindy) and Rolinda (Roli) the twins and Sarah were born while they lived on the family farm.

In 1964, after selling the family farm, Earl and his family moved to Hailey, Idaho where Earl worked for West Lake Silver Mining Company.  While the family was in Hailey Roxanne (Roxey) was born.  In 1971 Earl moved his family to Rupert, where he resided until his death.  He worked for Minidoka Irrigation and Riverside Dairy.  In 2009, at the age of 80 he retired from Minidoka Irrigation District.

Earl had many jobs though out his lifetime.  He was a farmer, first and foremost, he loved the land and what it could provide.  Every job he had was connected to the land; farmer, miner, ditch rider, dairy worker, heavy equipment operator.  He loved the opportunity to spend time outside and work with his hands.

Earl enjoyed many things in life, he loved spending time with his family and friends.  He loved a good cup of coffee, tinkering in his shop, helping others, hunting, fishing, spending time outdoors and a good power nap.

The family wishes to express their sincere gratitude to the staff at Minidoka Memorial Hospital for their kind care and dedication to our dad and grandpa and to the community for their loving prayers.

A Celebration of life will be held at 2:00 p.m. on Sunday, December 6, 2020 at Grace Church, 100 North Meridian Road, Rupert, Idaho with Pastor Travis Turner officiating.  Burial will be held at a later date.

From: Carol Shockey
Earl was such a kind man. He sure took good care of my sister reta his neighbor. You always made her feel like family. I'm forever grateful to him. My deepest sympathy to his family.

From: Cindy Hotchkiss
May he rest in peace...HUGS to all of your family..

From: Lucy burge
Buzz is my favorite uncle and always has been I will miss him terribly I'm do heart he's gone I love you uncle buzz forever u will be missed love you Lucy and don

From: Leonard (Hoss) & Cathy Ingalls
YOU KNOW HE WAS LOVED BY ALL WHO KNEW HIM...HE WILL BE MISED, BUT THING OF THE REUNION THEY ARE HAVING...GOD BLESS YOU ALL..

From: DebOrah Mitchell
My condolences to the family. Many prayers being sent to all

From: CAROL THOMPSON
Hugs and love to all of you, He was a great man. Loved him lots myself. Have hundreds of memory of both your parents. He always had a smile for everyone. He will be missed. I was adopted into the family. They thought of me as one of their own. Your in my thoughts. Love Carol

From: Marjorie Jensen
So sorry to hear of your Dad passing.Remember seeing him at the Wayside after church on Sunday.Prayers and hugs for your family..

From: Nala & Neta Posey
Buzz was the best at working hard, taking care of his family, teaching his daughters many guy things, gonna miss that smile & gentle soul. always loved to see & visit with him. he will leave big shoes shoes to fill so keep having your coffee gatherings & keep that family as close as always & share all those great memories & keep making more. SO VERY SORRY WE CAN NOT ATTEND THE SERVICE IN PERSON TO SHOP OUR SUPPORT TO ALL YOU. We love u & big HUGS TO YOU ALL AROUND