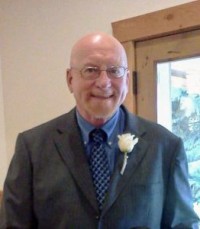 Gary was born April 14, 1947 in Norwalk, Ohio to the late Eugene F. and Elaine (O’Brien) Mack and was an avid traveler who had residences in Albion, ID, Jacksonville, NC and Bakersfield, CA.

Gary graduated from St. Paul High School in 1965 where he lettered in both football and track. He was also Co-Captain of the football team in his Senior year, and earned the honor of Eagle Scout. Gary graduated from John Carroll University in 1970 and the Reserve Officer Training Program (ROTC), and soon after joined the United States Marine Corps where he was promoted to 1st Lieutenant and served as a Nuclear Safety Officer at Camp Lejeune, NC.

Gary enjoyed many occupations throughout his life including Restaurant Chef and Manager, Factory Foreman at Ore-Ida, Sherriff, Insurance and Real Estate Agent, US Postal Serviceman, Long Haul Truck Driver and he particularly enjoyed his membership at St John Missionary Baptist Church in Bakersfield where he taught Sunday School and was the Vice President of the Usher Board.

Gary made long lasting relationships and sought to make friends wherever his travels took him.  His most fervent wish was to be known for his undying love for God, his Family, and his Church. He sought to serve others and to protect the lives of the unborn, and if he were here right now, he would ask you if you have asked Jesus to be your Lord and Savior.  He would say a prayer with anyone and was warm and welcoming with everyone he would meet.

The Memorial service will be held 6 p.m. Mountain time, Friday, March 5th, 2021 at Grace Community Church, 100 N. Meridian Road in Rupert, with Livestream for remote friends and family via https://graceid.org/live.

Interment Services at the Rupert Cemetery, Rupert, ID and a celebration of life/interment at the Mack family plot at St. Mary’s Cemetery in Norwalk, OH will be scheduled at a later date.

Memorial Contributions may be made to Gary’s favorite charities including Mercy Ships, Lifesavers Foundation, and Feed the Children.

Online condolences may be made by going to either: wehfh@eastmanfuneralhome.com or www.morrisonfuneralhome.net  Arrangements are under the direction of Morrison Funeral Home, 188 South Hwy 24 in Rupert.

From: Mandell & Mary Carolina
Sending our Condolences to Linda Maxwell Mack. Our sympathy and prayers ARE with you.