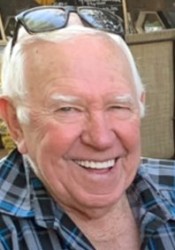 ROGER D. MCBRIDE
HEYBURN - Roger D. McBride, 81 year old Heyburn resident, passed away Tuesday, July 12, 2022 at Cassia Regional Hospital in Burley with his loving family by his side.
Roger was born on March 2, 1941 in Declo, Idaho, the son of Lenard and Mona Brower McBride.  He attended schools in Heyburn and Minico High School. While in school, he worked at the Alfresco Drive-In and an auto parts store. He married Elsie Anderson on December 13, 1956, she preceded him in death in 1998. In 1959 he started his own business, McBride Furnace Cleaning and Insulation Company. He loved to work and was a very hard worker and was most happy when he was working. He retired when he was 76 years old.  He was active in his community serving in the Lions Club and a member of the Elk’s Lodge. He was a member of the Church of Jesus Christ of Latter-day Saints and received his endowment in the Twin Falls, Idaho Temple and was sealed to his wife on August 12, 2021. Not only did he love to work, but he loved to play as well. You could find him fishing, bowling and golfing among other activities. For the last few years Roger has gone down south with Herb and Teesa to Arizona to golf and razer ride. It was always super fun and made lots of memories. Roger was a wonderful man, loved his family so much. He will be missed by all who knew him.
Roger had four children; Brock James McBride (deceased), Teesa Ann (Herb) Sinclair of Heyburn, Kathaleen McBride (deceased), Kevin Dean (Breanna) McBride of Heyburn; Grandchildren, Herb Cody Sinclair, Jessica Ann Sinclair, Jadyn Caisy, Addyson Ann McBride, Peyton Dean McBride, Lainey Mae McBride; Great-grandchildren, Jett Dean Sinclair, Rylee Rae Sinclair, Siblings, Kyle (Louise Uhl) McBride, Kyle preceded him in death, Tania McBride Hymas of Star, Idaho. He is also survived by several nephews. In keeping with his wishes, there will not be any formal services. A private family grave dedication at the Gem Memorial Gardens will take place at a later date. Services are under the direction of Morrison Funeral Home, 188 South Hwy 24 in Rupert.

My sincerest condolences to you all. he was such a great guy. mike really enjoyed the time he played golf with your dad. I enjoyed chatting with him. A truly wonderful person.

Sad to hear of Roger passing. I had the pleasure of associating with him in the consTruction Of many custom homes for several years. He was always reliable and professional with every project. His honesty and amiable personality will definitely be missed. He was a giant in the insulation business. My condolences to his family at this time.

Dad,father, grandfather and great grandfather a man with many titles. so sorry of ur lost. May God help all of you during your time grief.