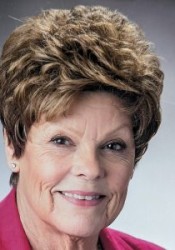 BURLEY - Christine A Ward 74 passed away July 26th 2022 in her home in Burley Idaho. Chris also known as (Chrissy) was born May 7th 1948 in Canton Ohio to Mary Lou and Edward P. Hutchinson.

Growing up with a father in the Military they moved quite frequently, upon settling in Brigham City Utah this is when she met her sweetheart Glenn Ward on a blind date. They eloped 6 weeks later. Married June 27th 1964 in Malad Idaho. Chris was 16 and Glenn was 23, they had a car, two suitcases and found a small apartment in Ogden to live in.
Four months later they rented Glenn's uncles dairy farm in Willard. She participated in all the functions of farm life. In 1965 Jennifer Lynn was born and 1969 Daniel Glenn joined the family.

Chris enjoyed being busy with the kids activities. She was assistant coach of Jenny's softball team and worked the Book Mobile at Willard Elementary. Chris enjoyed flowers and gardening she was an avid canner and took pride in a tidy home.
After 14 years they moved to Idaho and put down roots that became Wards Dairy. She continued to help with the work of the dairy and branched out doing merchandising with Skaggs Drug. She helped with cub scouts, girls camp and shared her knowledge of plants and gardening with church groups.

In 1992 Chris and Glenn moved to the house they reside in now. Through the years Chris was involved in all the expansion of the business. Purchase of land, equipment, building of barns etc. Chris worked side by side with Glenn, they were a team she was his rock, even supporting Glenn in his drag racing days.
Glenn and Chris are part of the original owners of High desert Milk.
Chris was a Board Member of Cassia Regional Hospital for 12 years. There she made friends and treasured relationships that would later play a big part in her overcoming colon cancer.

Chris had a love for books and enjoyed learning new things. She became an excellent cook over the years and enjoyed taking food to family and friends and had a great circle of friends. Visitors always felt welcome in her home.
Chris loved shopping trips with the girls, breakfast at the wayside and Sunday brunches.
She loved animals and had a special bond with Brittany her last dog and OBC her last cat.
Chris loved spending the winters in Arizona with Glenn.
Chris helped with the grandchildren; she was supportive to them in all of their pursuits. She loved and adored every one of them.
She became a great grandma in March 2022, something she wasn't sure she would experience.


Chris and Glenn shared 58 years of marriage; she was a loving wife, mother, grandma, great grandma, sister in law, and friend. Chris will be sorely missed.
Chris is survived by her husband Glenn, children Jenny (Steve) McGill,
Dan (Karla) Ward, grandchildren: Michael McGill, Stephanie (Layne) Sanderson, Kadan Ward, Andrew (Hayley) McGill, Kassie Ward, Karlie Ward, Keegan Ward and 1 great-grandchild Jacklynn McGill and preceded in death by her parents.
Funeral services will be held at 11:00 a.m. Thursday, August 4, 2022 at Morrison Funeral Home, 188 South Hwy 24 in Rupert. Burial will follow in the View Cemetery. A viewing for friends and family will be held from 5:00 to 7:00 p.m. Wednesday, August 3, 2022 at the Morrison Funeral Home and from 10:00a.m. - 10:45 a.m. prior to the funeral on Thursday.
A live webcast of the Funeral Service will be available and maintained at the following link: https://youtu.be/5jpoC3vhIHQ

Condolences for Christine A. Ward

I'm so sorry to hear this sad news. May the lord comfort you in this time of sorrow.

Jenny, I'm so Sorry to hear of the loss of your mother. I worked with her on the board at Cassia Regional Hospital for several years. She was such a lovely lady. my prayers are with you and your family.

We are so sorry to hear this. She was such a sweet lady. Our thoughts and prayers to all the family.