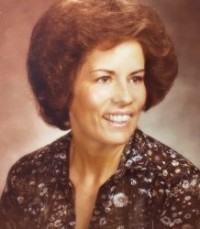 Evelyn was born October 8, 1942 in Ogden, Utah to Dudley and Eva Hardy Hamblin. Graduated from Davis High School, class of 1960.

Evelyn had a love for rock hunting. She could find treasures anywhere from Topaz Mountain to the gravel in her driveway. Her large collection of unique rocks, trilobites, sand dollars, crystals, and petrified wood were joyfully shown to anyone intrigued by her hobby.

She was proceeded in death by her parents, first husband Jerry Knighton, husband John Pfnister, and son Zeph Knighton.

Memorial services will be held at 11:00 am Sunday, May 2, 2021 at Morrison Funeral Home, 188 South Hwy 24 in Rupert, Idaho 83350. A live webcast of the Funeral Service will be available at the following link: https://youtu.be/DBFGEstOks8

From: SHELLY brooks Bybee
I was so sorry to hear of you mom's passing. I have a lot fond memories of her and your family, those were special times. You are in my thoughts and prayers. Love, Shelly