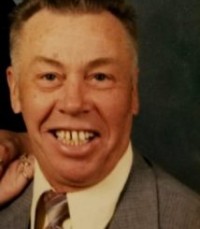 Olav was born February 20, 1932 to Hans Roones and Anna Marie Stockstad Roones at his family home in Milnor, North Dakota. He was the youngest of 9 children. The story goes Anna Marie was calling for the doctor to come but Olav couldn’t wait and was born right there by the telephone.

He grew up on the family farm learning to work hard doing chores and taking care of the animals. He cared for cows, chickens, ducks, pigs, and of course a dog. Before school each morning he would feed the animals and milk the cows. In the evening he would be greeted by quacking ducks waddling in a line which was a good indicator that it was time to feed and milk again! When neighbors needed help with their animals, he and his brother would milk up to 50 cows a day. Olav was proud of his accomplishments while attending school and won ribbons for his athletic abilities. He loved to run and could jump as high as he was tall. Baseball was his favorite sport. Olav graduated from Milnor High School in 1950. While in North Dakota he played the harmonica in a band called “The North Dakota Flickertails” he enjoyed singing, especially country music and had hopes to make a record in his younger years.

Olav met his one love, Carol while he was roofing the Roll family garage. She was bringing sandwiches out for the workers.  He never formally asked for her hand in marriage but told her he was going to buy her a ring when she was 16 years old before her family moved. 2 years later he followed Carol to California and asked her “don’t you think it’s time we got married?”  The couple was happily married January 28, 1961 in Long Beach California. Olav and Carol had just celebrated their 60th anniversary January of this year.

Olav would say “children make a house a home.” He exemplified this by turning his home into a loving, safe haven for his children, grandchildren and great-grandchildren or any family member or friend.  All those who have experienced his generous hospitality knew they would always be welcomed back “home” in their time of need, or for another fun family gathering. When his children were young, he built and painted a playhouse for them with Dutch windows and doors, palm tree fronds to cover the roof, and custom-built furniture for them to enjoy inside. Wherever the family has lived there has been a fish pond, playhouse, treehouse, garden and fruit trees.

After learning about Jehovah God and the truth of God’s word from the Bible Olav chose to dedicate his life to being one of Jehovah’s Witnesses November 11, 1971. His children remember preparing as a family for the weekly Watchtower study, playing Bible games together and even dressing up and acting out the Bible stories they read about. Some of his favorite articles were about creation in the AWAKE! magazine. Olav appreciated Jehovah’s creation and would talk with his family on trips to Sequoia National Park or the beach about the mountains, trees and animals along with all the other beautiful things that were created for us to enjoy.

He looked for opportunities to beautify the things around him in reflection of his love for Jehovah’s creation.

As such he embraced and took pride in his secular work for the City of Buena Park in California and once in Idaho working for the Burley City Department. He helped maintain and care for roads, golf courses and local businesses by keeping things neat, clean and attractive. He took pride in his work and was a trusted and responsible employee. Once Olav retired, he continued as an entrepreneur with a landscape business caring for all manner of plants for neighborhood businesses and individuals. Retirement allowed him more time to dedicate to serving Jehovah God in the ministry, but even before that he was able to volunteer in the building of assembly and kingdom halls in both California and Idaho.

Olav loved being around family and eating out together. If a restaurant had a dance floor that’s where Olav wanted to go since he loved music and dancing with his beautiful wife. Many times, the two of them would take center stage to others delight and enjoyment. Carol was told by her mother early in their relationship that she better learn to dance! They very much enjoyed playing cards, bible reading, gardening, family gatherings and preaching about God’s wonderful promises together. Olav was also very fond of the outdoors and Jehovah’s creation, playing ball games at the park, swimming, walks on the beach, canoeing, fishing, and camping. One of his favorite songs is “Jehovah Is My Shepherd” from our song book, “Sing Out Joyfully” to Jehovah.

The family thanks Horizon Home Health with a special thanks to Mimi the coordinator of Harrison Hope, Dan for singing to Olav, giving him his own concert for the evening and Tonya Marie for the massages she gave dad to help him relax. We are also appreciative to have had someone to talk to while caring for dad that fully understands what we were all going through.

Olav is survived by his wife Carol, his 3 children Lorie, Theresa and Timothy along with 9 grandchildren, and 9 great-grandchildren. Olav’s desire was to greet his parents, 8 siblings and his great-grandson along with all of his loved ones whom have fallen asleep in death before him with open arms and a great big jolly smile in the promised paradise earth where Jehovah, our almighty God has appointed Jesus, our Savior, Lord, and King as ruler in perfect peace forever! (Philippians 2:8-11) Jehovah will call to him and we will hear him answer from his sleeping state during the time of the resurrection. (Job 14:15) Death ends a life, not a relationship. Olav’s wish was that ALL of his immediate and extended family come to an accurate knowledge of the truth, come into a close relationship with their Heavenly Father, and avail themselves of this perfect gift right alongside him. (John 17:3).

Access to the memorial service meeting is as shown below.